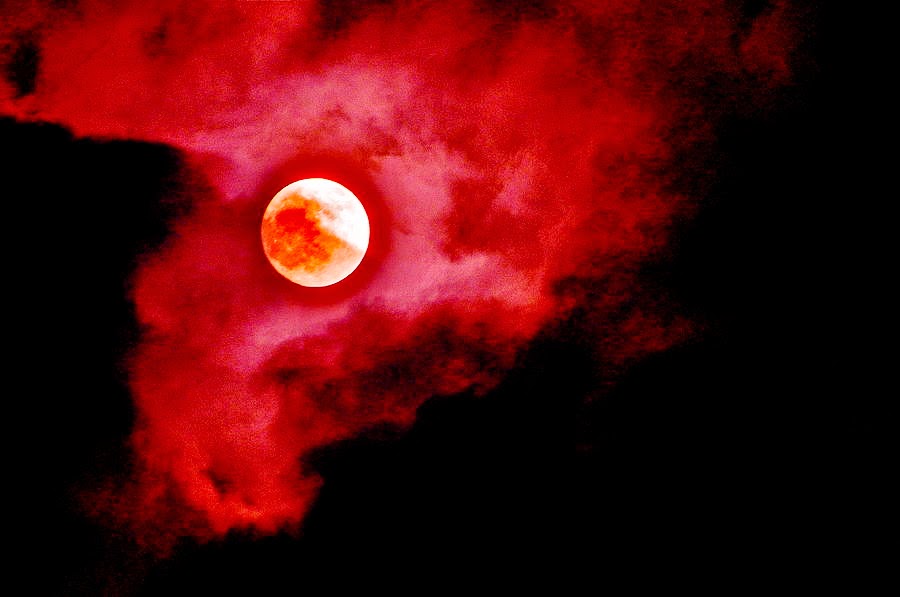 They call it a "Blood Moon". It sounds pretty ominous and from some of the pictures of this phenomena, it looks it too. Right now it has been getting some play in the media and some claim it is a sign.

I am sure most of us have seen a "Blood Moon" at one time or other in our lives, or at least, a red moon. Back in the 1970s I outlined and started writing a novel entitled, "Night of the Red Moon". There had been one in the sky when I got the idea for the plot. They are not new, then, so why the sudden interest.

It is because we are on the verge of a tetrad. Oh, I see, a tetrad.

Well, a tetrad could be "a four-part structure that forms during the prophase of meiosis and consists of two homologous chromosomes, each composed of two sister chromatids". It could be, but fortunately the tetrad of concern tonight isn't that because I don't have time to learn that much biology right now.

Basic definition of a tetrad is a group of four. Wow, that's much simpler. The specific group of four that is raising some eyebrows now is not so much in the astronomy world as the religious sphere. It is a tetrad of solar eclipses (or is it eclipsi?  Apparently not, my spellcheck doesn't like this word.) The hubbub hasn't really centered on the eclipses, but on what is being referred to as a tetrad of "blood moons". It is also important to note that for eclipses to be considered a tetrad they must come six months apart with no partial eclipses between them.)

Okay, blood moons do go with eclipses and we are about to have a tetrad of eclipses beginning very shortly. Some tie significant events to such things. Yet this is not really so rare. We will have eight such events in this century alone. We had the first in 2001. (Hmm, that is when Wilmington Trust forced me to retire. Maybe there is something to this significant event stuff after all.)  Anyway, if Tetrad Eclipses are not all that rare, why a fuss about this particular group?

It is because of when the "Blood Moons" will appear (see chart below).

You see two will appear on sequential Passovers and two on sequential Sukkots (Feast of Tabernacles), important days on the Jewish Calendar.

Some are always looking to predict the time when Christ will return and when God will bring judgment on the world. They pull lone verses out of Scripture sometimes and come up with a theory that "now is the hour". In this case they pulled three references to what might be "Blood Moons".

3.          Revelation 6:12 When he opened the sixth seal, I looked, and behold, there was a great earthquake, and the sun became black as sackcloth, the full moon became like blood…  (All verses from the English Standard version.)

Certainly these prophesies describe whet could be an eclipse situation, the darkness of the sun accompanied by a blood red moon. We may see just this occurs next week on the 15th. After all, what is a total eclipse? It is when the moon comes between the earth and the sun so that the sunlight is for a bit completely blocked from view and we are thrown into darkness during the midst of the day.

The difficulty with all this is "Blood Moons" are only light being reflected off the moon surface that is turned to the reddish hue by the earth's atmosphere in the same manner as we have sunsets and sunrises that are red. One cannot really predict that there will be four blood moons just because there will be four total eclipses. Even if there should be, they may not be visible or only visible in limited parts of the world.

There have also been eight such known tetrads all ready since the time of Christ.

Now, I don't want to downplay that someday the Lord will return. I believe myself that the Day of the Lord is not so far off in the future now. There are many things happening now fulfilling the prophesies about the end times; however, I say look to Israel and what is happening around it rather than to the moon.

I also do not wish to ignore the significance of the Jewish Holy Days, they do point to events. After all, Jesus died at Passover, rose on First Fruits and the Holy Spirit came on Pentecost. Surely the fall Holy Days harbor things yet to come.

It is possible these eclipses will mean something, but maybe not. And what does it do for us if we did know the exact date of these things? It is more pressing we spread the Gospel to others whether the end of the world at hand or not, people die every day in many ways and their eternal fate is no different if they are run over by a bus than if they die in Armageddon. And we don't know when a bus might hit us either or when a mudslide will come or when a hurricane will drown us.

We have certainly been admonished to know what is coming, to read Revelation, but we haven't been told the date. Some would be wise when they start trying to pinpoint our deadline to pull these verses first:

Matthew 24:36 “But concerning that day and hour no one knows, not even the angels of heaven, nor the Son, but the Father only.

Mark 13:32 “But concerning that day or that hour, no one knows, not even the angels in heaven, nor the Son, but only the Father.


One must tread carefully. We do not need another Harold Camping style media story. We have been warned to be ever ready. Why? Because we know not what hour the bridegroom comes. Let's be busy about sowing seed rather than sowing speculation.

I know, of course, many who read this neither give stock to Blood Moons or to the salvation offered through Jesus Christ. You'll just have to accept that I do believe in the meaning of the Cross and the Resurrection and the Easter soon upon us. You must allow me that belief and what you do with it is the chance you take.

Please visit my other blogs. 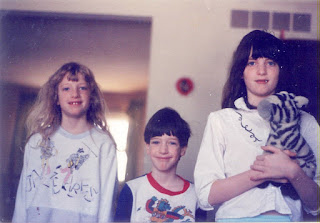